The Phone Call to Hubby

After my initial shock of discovering I was pregnant with triplets, I had a few phone calls to make. I walked out of the scan place and dialed Daniel's number.
He picked up and I asked "are you sitting down?"
"Holy crap, holy crap, holy crap"
"I mean it, are you sitting down?"
"Yes, oh crap"
"Hang on a minute, what are you thinking?" I asked, realising that we had discussed the possibility of twins as they run in our family.
"It's twins isn't it?" He asked, in a very petrified voice.
"Um, actually honey, there's three in there"
Silence.
Then - "are you f$!@ing kidding me!?"
And so the conversation went on with me trying to calm him down but at the same time trying to convince him that I WAS NOT joking and I would never joke about something like that.
I could hear his work mates in the background having a huge laugh at his expense.
Eventually as it started to sink in he went silent. Again.
"Honey, are you ok?"
"I don't think I can eat my lunch now."
I left it at that! Then desperately tried to call my close girlfriends - none of whom answered! Frustrated I started on family and managed to get Daniel's cousin who I am really close too. She said she wanted to cry for me, she was over the moon and scared all at once.
I went to my favourite cafe and ordered the healthiest fresh juice they served.
My mum and step father had taken Amali to swimming lesson that morning, so I headed there to tell them. My mum's first reaction was 'Oh my god. I'm going to have to quit my job', my step dad's was 'I'm going outside for a smoke'!
The best thing about this last week and a half was watching people's responses. Most of them didn't believe us!
When I got back into the car 10 minutes later I had two missed calls on my phone, both from friends who I hadn't even called. I called one back and she was freaking out and saying 'are you serious!?' How on earth did she already know you ask?
Blame that on a very shocked husband who put it on Facebook.
Yep. 8 weeks pregnant with triplets and he put it on Facebook. By the time I got home I was thinking, oh well, I may as well put it on there too. So I think it became the hottest status update that day! A lot of people were commenting about it being a joke - until I posted the scan pictures.
Daniel rang back about an hour later and sounded like he had drunk a bottle of rum - he was blissed out and calm, saying what an amazing experience this was and how blessed we were. And if anyone knows my husband - that is not like him at all!
The last 10 days have been huge for us, and just the beginning too. Many sleepless nights were spent on the couch writing lists and googling triplet pregnancies and gathering information. I came across an amazing, but shocking set of pictures of a woman who had triplets. I suspect that it was her first pregnancy as her tummy was so flat at the start. 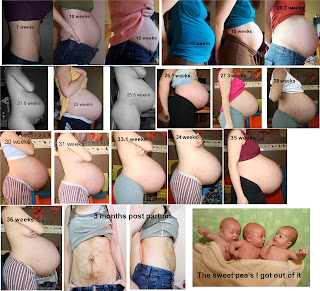 I keep telling myself this should be easier on me as my uterus and skin have already stretched to 40 weeks, so it'll be easier, right? 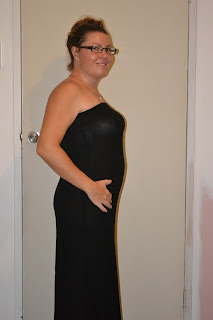 Here's me at 8 weeks 2 days. It's not really a 'triplet bump', just a 'left over from two previous babies bump'.
Heading to 10 weeks in a few days, and it has certainly gotten a lot bigger now!
More pics to come each week or so.
Posted by Mum of 5 to be at 21:54