The Day that Altered our Life (Just slightly!)

I decided to start this blog after a life changing ultrasound at the beginning of my third and final pregnancy. Before I get to that, here's a little introduction to 'us'.
My husband, Daniel, and I have been married 3 years this year, together 11. We did everything 'the wrong way around' as it so often happens in this day and age. We moved in together, got engaged, got pregnant, bought our first house, had our first child, got pregnant, had our second child and then got married.
During this time he worked away anywhere between 2-6 weeks at a time and I was studying full time to become a Primary School Teacher.
After many years of him working away, and me finishing uni, he was offered a job 10 minutes from our house. The chance to live a normal family life versus going bush to get full time teacher work? We took the first option. Since then we haven't looked back. One day I will be a full time teacher, but for now, our family is together all the time and we have had the opportunity to purchase our dream property 10 minutes from the beach.
We now own 'Toolborough Park' and have been here for 6 months. 6 long months of cleaning up the  place after 20 plus years of neglect. Since then we've had lots of rain, and have been flooded in 4 times. However, that would be the only downside - and even then, the water drains within 1-2 days so we really can't complain. 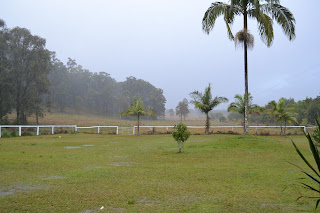 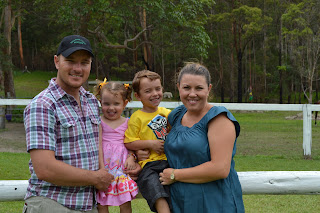 But it wasn't enough.
Of course I wanted/needed/craved another baby. So my dutiful husband agreed eventually (which he often does, got to love him) and four months later - ta-da!! After a few days of feeling nauseous in the afternoon and very tired, I finally did a test. Instantly it came up positive, and very, very dark. As with my other 2 pregnancies, I did a little dance in the toilet with a huge grin on my face, then presented the stick to my perplexed husband.
"Oh Shit. My life is over" Yep, that was the response.
Then, "Wow, awesome." Very typical of Daniel, and probably most males.
And from there our journey begins.
Off I trotted to the doctor, and left with a scan referral in my hand for 2 weeks time. The only difference I felt was not being able to sleep on my stomach straight away, strange, but I put it down to my third pregnancy and being ultra sensitive to it all this time around. Scan day came and I drank the 1 litre of water I had been told to, and had to race back up our driveway after dropping Jordan at school to go to the loo. There was no way I could keep all that water in! Again, I put it down to a bladder that was feeling the affects of a third pregnancy.
How wrong I was.
As soon as the sonographer put the scan wand on my stomach I saw three circles. He immediately said "Well, there are definitely 2 gestational sacs".
Wow, ok, so twins, I had a sneaking suspicion as they are in our family, but I tried not to get to excited as he was yet to find  heart beats. After much discussion it was decided that I needed an internal scan as I have a retroverted uterus and that was making it hard to find heart beats.
As soon as these images came up I again saw three circles. I have studied my own previous ultrasounds to know that I have only ever had one circle - or yolk sac.
He said, "well, there's definitely 2 heart beats, and this one makes three."
"Oh my God. Fuck." Yep, I swore, a lot. And apologised. A lot. Then I started laughing and had a sprinkling of tears. If Daniel had have been there I think he would have fainted. Or walked out.
The sonographer was stunned and excited. He told me he in an identical twin himself, had done a twin scan that morning, and another the previous day! But this topped it off as he had never done triplets.
Yep, you heard it straight. Triplets.
Three gestational sacs, three placentas, three heart beats and three embryos. Wow.
Here is the scan picture 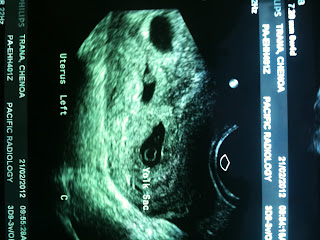 Baby A, Baby B and Baby C (left to right).
Stats are as follows for this 8w1d scan (based on my LMP, but with a longer than normal cycle)
Baby A - 7.92mm (6w4d) heart rate of 131bpm
Baby B - 7.11mm (6w4d) heart rate of 137bpm
Baby C - 7.15mm (6w4d) heart rate of 117bpm
Our lives are now in a rapid change. As well as the complete unknown territory we are sailing in to, we have to extend our house, buy another new car (mine is only 4 months old) - and a bigger one, deal with the possibility of hospitalisation, a possible c-section, possible premature babies, still giving my two wonderful older children quality time (and hubby), and the list goes on and on and on and on!
But if I sat there thinking of all this, I wouldn't get anywhere except being stressed. So I did what any organised mother would do - I wrote lists.
At 3am.
And already so of the 'to do's' have been done. There is lots to go, and lots of money to go too, but we'll get there with the amazing help from family and friends.
It is still early days, I'm currently 9w2d, so anything can still happen, but whatever happens, I'll roll with it. That's my nature. The response I have received the most is 'if anyone can do it Chenoa, you can.'
The support from family and friends is beautiful, overwhelming and caring.
We're going to need it.