Apologies to you all! I have been very slack the last 2 weeks, but I do have a good excuse. I have been soooo sick. Those that know me know that I'm a 'go get em', constantly busy person who does not get sick. Well, it seems that my body is far to busy growing these 3 babies at the moment to concern itself with protecting itself! Honestly, 2 colds in 3 weeks really knocked me for 6. Both times I literally had to sit on the couch for 3 days and do nothing. Thank you to all that looked after me and my children. You know who you are!

A little bit of bad news last week too. Saturday night I was awake for what seemed like hours, scratching the crap put of my hands and feet. Finally at 3am I gave up sleep and googled it, knowing it wasn't normal. There were explanations for PUPPS, general pregnancy itching and Cholestasis. Every thing pointed to Cholestasis of Pregnancy. So I rang birth suite who wanted me to come in straight away, but then they rang back and explained that the blood tests they wanted to do could not be done until Monday morning after I had fasted 12 hours anyway. As long as the babies were moving, I could stay at home. The midwife kind of scared me a bit by saying they may want to send me to Brisbane to either deliver them or put me on hospital bed rest with monitoring......luckily that didn't happen. They monitored me and the babies on Monday, took the bloods (which take 48 hours to get a result) and were happy to send me on my way after a tour of the birth suite.

So, what is Cholestasis of Pregnancy? Basically it is when the liver struggles to operate normally and get rid of the bile in your body. This means the bile comes to the pores in your skin and makes you itch. There is no rash, and in severe cases you can get quite jaundiced. The most itchy period is at night time, on hands and feet. And boy, let me tell you it itches!!! Sure, the rest of my body gets a bit itchy here and there, but nothing at all compared to the itch on my hands and feet. It feels like there are little worms crawling around under my skin. And it is honestly almost orgasmic to scratch!

Typically your bile levels should be under 12, mine were 16. 40 is considered to be severe and 'lets get these babies out now', as this condition can lead to stillborn babies if left untreated/unmonitored and they generally induce singletons before 37/38 weeks. Obviously I am not going to get that far anyway, but I had another blood test today and we will compare the results with last weeks ones to see if it is stabilising or rising. There are some drugs that I can take but Ted believes that there is no conclusive proof that they actually work, and from what I have read, I believe this too. So all I take is antihistamines at night, which also help me sleep really deep (yay!), and am watching my diet and drinking as much water as I can possibly fit in (and wee out), to help flush my system.

I have another scan tomorrow and then an appointment with Ted to discuss the scan and the bile results. I'll know more then, but I'm just sticking positive for now. Only 11 days until 32 weeks and then I can have them at Nambour, and don't have to go to Brisbane  - wahoo!

It's been hard for me lately not being able to do things with my kids. Amali even got upset at me the other day and cried that she wanted to go to Grandi's. Made me feel a little sad. It is absolutely wonderful that mum is there for her and Jordan, but sometimes I watch them walking around the paddock picking up horse poo together and I think 'I should be doing that'. I know, very strange! But it is only for a while more, yes, then I'll have my hands full with 3 babies, but physically I can do things with them again.

So we made cupcakes the other day and then I let them decorate them by themselves. I thought it would be a bit of a disaster, but they loved it and had so much fun. 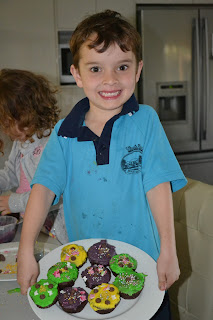 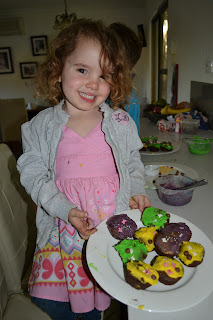 Then of course we ate some, took some to school for the teachers and then our Rhodesian Ridgeback, Zuka ate the rest off the bench. Ooops. So we made a Rainbow Cake the next day to make up for it!

I have really been noticing lots of pressure in the last few days, especially if I have been driving or sitting in a chair. As soon as I get up or out of the car it seriously feels the the bottom is going to drop out of this belly! Whether or not it is just the weight, or that Isaac has engaged, I'm not sure, but I'll find out how far down his head is tomorrow. I've also been feeling little 'things' happening in my cervix - again, I'm not sure if it means it is shortening or that Isaac is tickling it! My belly has gotten much bigger, and lower, but not as in 'dropped', more so just the weight of the babies pulling it down. But that just means they are growing!

Today I noticed my feet and ankles swell up and then not go back down, even after a sleep and putting my feet up. I swelled horribly with Jordan and Amali, but they were Summer babies so I wasn't sure what was going to happen this time round. Walking is also very hard. A little bit of walking (as in around the house) is fine, but I did the shopping the other day - in store - and that was VERY hard by the end. I won't be doing that again. I also keep having little mini cat naps during the day. Very unlike me. I'll be sitting in my recliner, watching the Olympics, and suddenly the urge to close my eyes comes over me and I cannot fight it. Then I wake up 20 minutes later as fresh as a daisy (or as fresh as a 30 week pregnant with triplets lady can be). I am giving in to it as it is obviously my body's way of coping.

And finally the belly pics! There has certainly been lots of growth in the last 2 weeks since my last pic, the stretch marks are creeping up higher on my belly, Daniel said it is beginning to look like a brain! 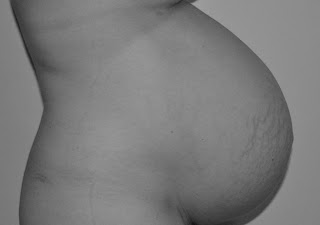 And I even remembered to lift up my boobs this week! You can imagine how low it is getting though, I couldn't let you see any more without letting you see too much if you know what I mean!

And this one, the comparison, really gives you an idea of the 2 weeks of growth. Wow. It even shocks me! 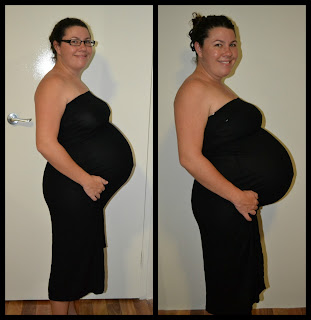 I'll update you soon on the scan and bloods results.