Can you believe it? I can't! My bubbas are 1 month! It seems like only yesterday I was sitting in the Special Care Unit gazing down at my newborn triplets. I wonder how many years I'll say that for.....

So, it's still pretty easy. I won't lie, there are hard times. About 6-8pm. Witching hour (or 2). They are a little unsettled and really want to just be held at this time. Which is not possible. It may sound harsh, but until you've had more than 1 new born, you probably won't understand! And I mean that in the nicest way! 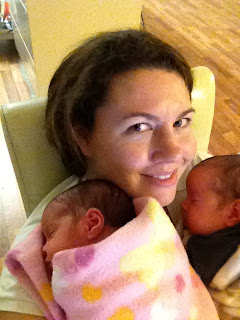 How I spend witching hour when it gets really bad - note the two sleeping babies? Cheeky buggers.

You just can't hold them and cuddle them to sleep (apart from the above photo, this does not happen!). I only have 2 arms, and usually one is doing something with the other children or making dinner. I let me babies cry. I don't really do 'cry it out', but I am getting them to self settle. Dylan does it himself 80% of the time, Ailah about 50% of the time and Isaac about 20% of the time - that's without dummies.

Ahhhh, dummies. The most wonderful creation and also the worst. They are a complete Catch 22. Jordan had one until 6 months old when he got his first cold, had a blocked nose and that was it. Dummy gone. I gave Amali one when she was about 5 weeks old, and she turned into a possessed baby so I promptly got rid of it. Now, 3.5 years later she still sucks her fingers.........hmmmmm. 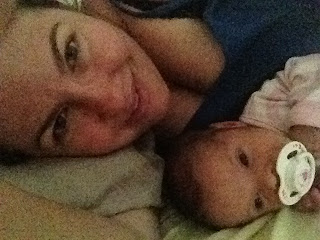 I do use dummies with the trio. Dylan has only just started liking one, which I'm not sure I like! Isaac is quite dummy dependent and Ailah usually only when she is unsettled. I'm in two minds. I will keep you updated on that one!

Jordan having some quality time with Dylan and Ailah 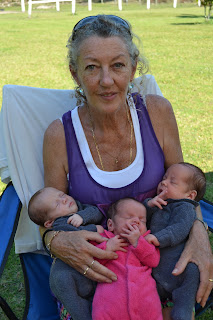 Gandi having her first triplet cuddle on her birthday. Isaac is on the left, Dylan on the right.


I also do routines. I use that word carefully. I am still flexible, but I keep and eye on the clock somewhat. Here is our daily routine:

And I'm sure this is about to change. As it will many times over. But it works for me. Lots of people ask me about feeding. If one wakes and another looks to be stirring, I wake that one as well and feed both together. Then the 3rd. If one wakes and no one else is stirring, I feed that one by itself and then wake the 2nd and 3rd. If all wake - I may put one in the swing or lie them next to me with a dummy firmly held in their mouth!
Yes, sometimes all three cry. Can't be helped. It's going to happen and there isn't always going to be someone else around to pick them up. 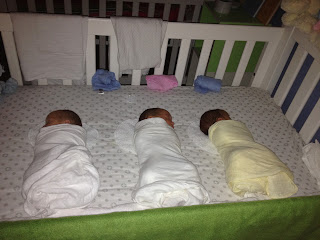 This is how they look when I put them down for a sleep. 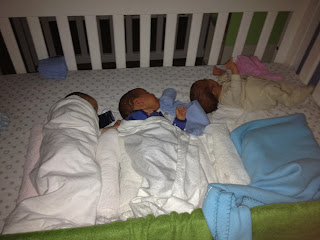 This is how they look at the end of a sleep. I had no idea a 4 week old baby could move this much. That is Ailah.

And no, I'm not super mum. I get cranky at them. I've had a few teary moments. It IS hard sometimes. But I get over it. I have to. 90% of the time they are fantastic and easy. And I move on, life's too short to stress over things.

I have learnt that this past week in a big way. One of the pregnant triplet mums from Australia lost 2 of her girls to TTTS (Triplet to Triplet Syndrome) at 18 weeks. A terrible tragedy for her. And then the HOM (Higher Order Multiples) community was rocked again with the death of beautiful April. A beautiful 12 week old girl, who leaves behind her brother and sister triplets. She died in her sleep, SIDS. She was perfectly healthy. My heart stopped when I found out. I know it's naive, but you just expect after going through a high risk pregnancy, premature newborns and NICU time that it's enough. You know? Then this poor family gets hit it the most heartbreaking way. April, and many others who are now angel babies will be remembered by us on October 15th - Pregnancy and Infant Loss Remembrance Day. Light a candle, let a balloon go, anything, even a moments thought. If you know someone who has experienced loss, don't be afraid to talk to them about it. Say their child's name. Acknowledge their baby. Acknowledge their grief and let them know you are there for them. 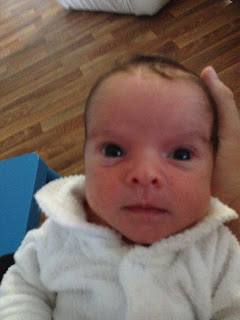 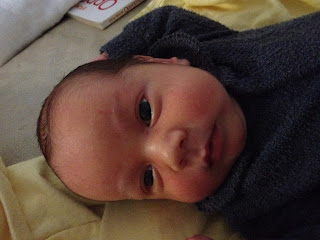 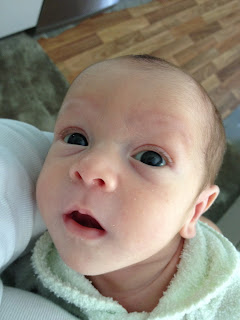 I'll also be sending love across the oceans so my beautiful American friend to remember her angel babies. 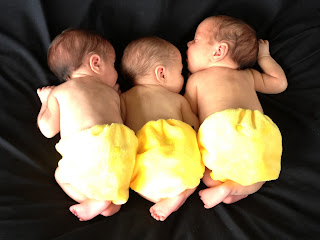