I have decided to share with you all the 3 images of our babies entering the world. Taken by Emily Black, they are very tasteful and I don't think they will offend anyone. However, I have put them at the end of this post, so if you think you will be offended, don't scroll all the way down!

So it has taken me ages to find the time to write this! Even as I do begin to type, I have Ailah in my arms hiccuping like mad. But don't get me started on hiccups! That's a whole other post! Honestly though, things have been great. I've been going out with them (and the older 2) and it's pretty easy. They sleep so well (except for today) and it just takes longer to get them all in/our of the car. 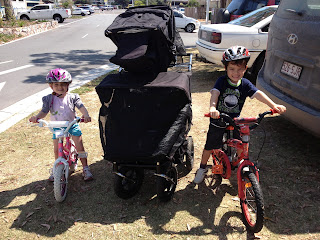 My first outing by myself with the older kids in tow. 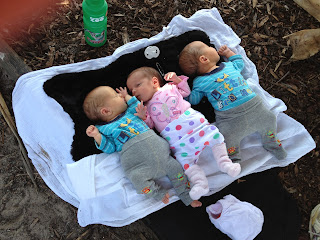 Chilling at the park

They are all feeding roughly every 3-4 hours still and pretty much go straight to sleep afterwards. I've just noticed them having more awake time in the last few days, it's nice to see little eyes open wide, beginning to explore the world. Albeit a fuzzy world! We have a great night time routine. They wake from their last nap at about 8:30, I bath the first two (separately), dress them, wrap them then it is boob time and bed. Then repeated for the third bubba. Usually they are all out by 10pm and I jump straight into bed. They then wake about 1-2am and then 5-6am. It takes about an hour to feed all three and they usually go straight back to sleep without any fuss. 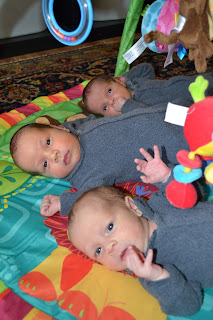 Ailah is still the smallest, I have been giving her top up feeds of expressed breast milk 2-3 times a day if she doesn't feed very well. She's not putting on as much weight as the boys so hopefully this will help her. She has the longest lashes and super cute lips. I can't wait to see if her hair will be curly like Amali's! She manages to wriggle out of her wrap and even nappies. I'd say she'll be the first to crawl and walk if that's anything to go by! Isaac and her are currently fighting for the 'most annoying' triplet trophy! 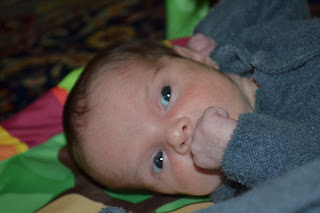 Isaac is by far the loudest baby I have heard. He has an ear piercing scream that goes straight through you! If I had 3 Isaac's I'd be in trouble! But, he has the biggest eyes and is generally the most awake. He likes sleeping on his side, but only during the day. He loves his dummy. Grrrrr, don't get me started on dummies either! 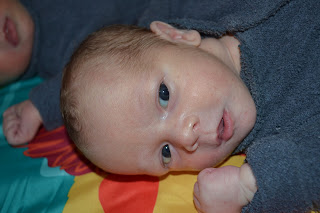 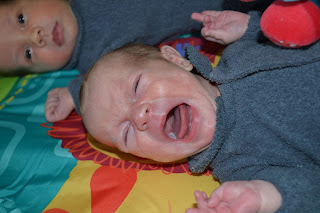 Dylan is still huge - but it's funny, looking at him I feel like he is this huge baby but Amali and Jordan were born bigger than what he is now. He is my 'good' baby. He feeds perfectly, then goes straight to sleep. He has wet nappies and pooey nappies and barely needs a burp. If I had 3 Dylan's I'd be one happy mumma! 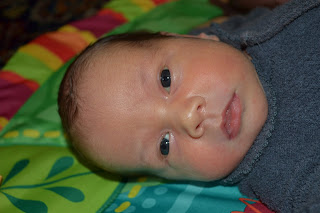 But jokes aside, sometimes I look at them and realise that I have 3 babies!! It is such a surreal feeling, I suppose only one that other triplet mummies can understand. Things have been so good, I'm literally waiting for it to get harder. I know it will. I'm not that naive, and if today was anything to go by.......!! 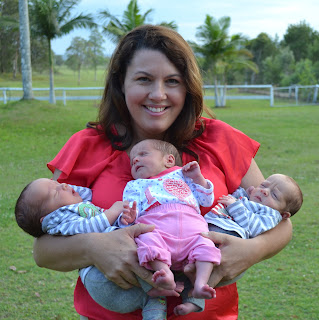 As for me, due to it being school holidays I get to have a sleep in every morning so haven't needed too many naps during the day time, but that will all change next week. I'm feeling pretty fantastic, my tummy is going down nicely, I only have back pain if I'm not wearing my support band, and even then it's not too painful. A lot of people have asked about 'down there' - well, I'm pretty good. My pelvic floor has held out pretty good and I feel very 'normal' down there. My nipples are taking the strain very well and only get sore after Ailah has fed really bad and I haven't corrected her. Seeing that this is a 'warts and all' blog, I will keep putting belly shots up from time to time. 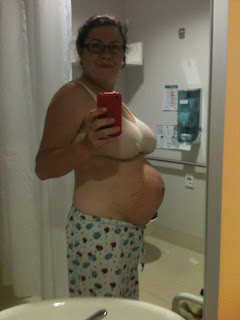 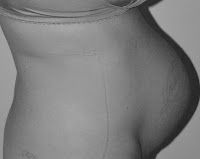 The one on the left was taken on Day 4 while still in hospital, the black and white ones were taken at 2 weeks post partum.

The birth pictures are below. Just scroll down if you want to.

I only have the small size for now. I think they are very tastefully edited! Thank you once again Emily. (Thats meconium - baby poo - coming out of Dylan's bum!)