I am found quite often, sitting there smiling to myself. These three little babies inside me sure are active. I love feeling them move, I think it is the best moment in anyone's pregnancy when they feel their babies moving. Not just little butterfly flutters, or pops, but I can feel rolling and tiny kicks. The kicks feel like I have a 12 month old baby poking me with their index finger from the inside out. It's very reassuring.

I had a little scare the other night, I just kept getting small cramps (which I never had with my other pregnancies) at the top of my cervix, and of course they were there as I was putting the kids to bed, so I couldn't just lie down. I practically threw them in bed and laid back on the recliner. They stopped within moments. Just another warning from my body I suppose. I haven't had any since, otherwise I would have been worried, but all is quiet on the cramping front now.

Daniel is still in Thailand, spending way too much money of course - he doesn't have his wife there to keep him in check. It was a bit scary with the earthquake and tsunami warning the other night, he was in the 'danger' zone, in Phuket, but they were all evacuated immediately and were kept in the tsunami evacuation zone for 4 hours, then the all clear was given and they were allowed back to the hotel. Problem was, he posted 'Just been evacuated from our hotel' on Facebook. He didn't tell me anything. I had friends ringing and texting, checking on him, but at that stage I hadn't even heard about it at all. Great way to scare a pregnant lady! He comes home Sunday lunch time. I've certainly missed him, but the house has been staying so neat and tidy!!

I dare say he'll get a rude shock at the size of my belly after not seeing it for 8 days. I know you are probably thinking 'sure, sure, it can't grow that much in 8 days.' Um, yes it can! It's a little scary! Here is a picture of when I was pregnant with Jordan (#1) at 25 weeks. 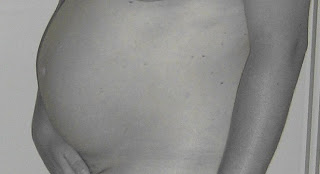 And then this is me (taken from my phone by Jordan as the camera is still with Daniel in Thailand) at 13 weeks and 5 days. 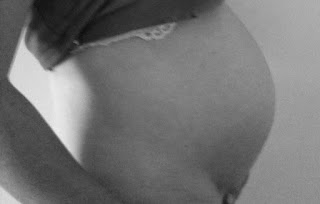 It's not exactly the same, but you get the general idea.....!


I entered into a competition on our local radio, 92.7 Mix FM, to win a new kitchen up to the value of $25,000. Of course I put in about the triplets, but we really do have a shoddy kitchen! Anyway, the 5 finalists get announced next week. I'll keep you posted!
Posted by Mum of 5 to be at 19:07