At 14 weeks and 4 days the first of my fortnightly scans has begun. Feeling rather pleased with myself that I have gotten this far, and that I am now enjoying the scans, not getting worried before them. I really wanted my sonographer to try and tell me what sexes they were today, he was a bit reluctant as first but we got a few good looks and could fairly clearly see at least one. He has said that he is no where near confident, but  in saying that,  they all look like boys.....however, before we get too excited I'm fairly sure I saw a flash of girl bits on Baby B, so we'll just have to wait and see in a fortnight!

Here are our latest portraits: 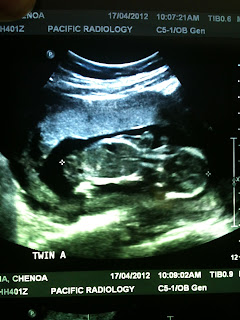 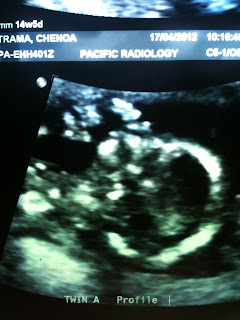 Baby A's profile and spine, facing away from us. It is actually sucking its thumb in the left hand shot! Baby A is on my right hand side. He said it looked as though it was a boy. 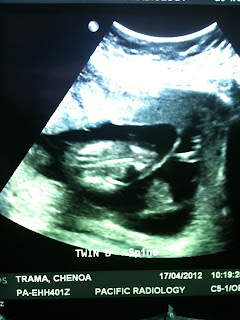 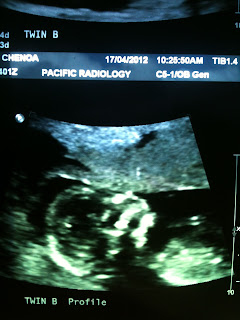 Baby B's profile and spine shot, facing away with head tucked into its chest so we can't see it. Baby B is lying above A and C, in the middle. 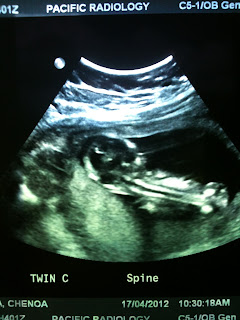 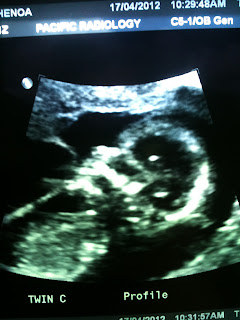 Baby C's profile and spine shot, again, facing away from the camera. I love how in the second picture you can clearly see the spine and two little pelvic bones at the base! Baby C is not being squashed so much anymore, it has managed to pop out the side a little bit.

Here is the shot of a little (presumably) penis. Its not super clear in the picture, but we got a good look during the scan and I'm fairly confident that Baby C is a boy. The picture is two legs up in the air and you can see a little white circular dot in the middle at the crotch area with a little protrusion sticking up. 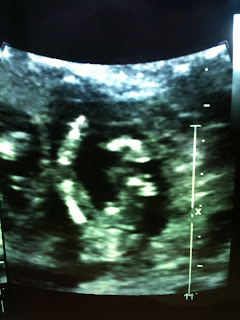 And this is our trio - the only shot he could get of them all together. 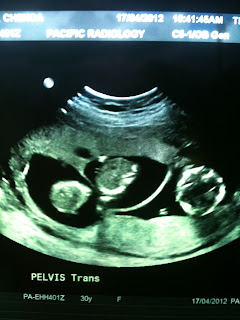 Daniel is home from Thailand, and although I didn't get my iPad, I did get a big suitcase to take to the hospital with all mine and the babies bits and pieces in, and a beautiful Jade necklace which I adore. It is nice to have him home, but the poor thing flew in lunch time Sunday and has had 2 4am starts since....needless to say he is a tad tired and grumpy. And sleeping next to me who rolls around all night and blows my nose and gets up to pee....yep, you get the idea!

Other than not sleeping great (get used to it Chenoa), I seriously feel as though I am only having one baby (apart from the bump). It feels like any normal pregnancy, healthy and wonderful. By the end of the day I feel a bit of pressure in my cervix from the weight, so I just have a lie back on my recliner while the children ruin the house. I definitely slowed down as soon as I found out there were 3 in there, but now I know I have to take it down another notch as I'm getting bigger. Don't get me wrong, I know I'm going to get far bigger, but I'm at least 8 weeks bigger than a singleton pregnancy so it is a bit of a rude shock to my body so soon.

I finally heard from the hospital today. It is a wonder that their tone changed the second they had my referral in their hands. I mean - did they think I was lying?? However, my poor doctor is being told lots of conflicting information and has been told she needs to refer me to Nambour Hospital first.....then 20 minutes later I get a call from a lovely midwife at Brisbane saying they will discuss my case tomorrow in their meeting, as I am outside their normal catchment......She said she'll either call back tomorrow or Thursday, so I'll soon find out either way.

Apart from my exciting scan, we have other exciting news!! We are finalists in the kitchen competition!!! It is on our local radio station, 92.7 Mix FM and it is the chance to win a new kitchen and appliances up to $25,000!! There are 5 finalists, including me. The host is coming to my place tomorrow to interview me and take video and photos of my kitchen. Then once all finalists have had this happen, they put them on their website and the public gets to vote for who they want to win! I'm going to be plugging it everywhere! We honestly have the worst kitchen.....red bench tops, chipboard disintegrating, no space, built in bread board (ewww) and the fact that it is 30 years old! Fingers crossed and I'll let you know when and how to vote.

Weekly belly shots will resume Friday as my faithful camera made it home without a quick dip in the Thai sea.
Posted by Mum of 5 to be at 20:24