The Way Things Are Now

I've had a lot of 'well, that's the way things are now' moments lately.
Like the state of my plastics drawer. BT (Before Triplets) it was neat and tidy. AT (After Triplets) it is a mess. Here's a few other things AT:
Getting in the car takes longer
There are more nappies to wash
I now breastfeed and read to/with older children
I have managed to grow and extra arm (not really - but it seems I have)
My floor is constantly filthy
Amali's room is constantly filthy
Jordan's hair never seems to get brushed before school. I am seen using my fingers as we walk to the classroom
Large plastic containers now get put in the dishwasher
The dishwasher is always on
The washing machine is always on
The house only looks clean and tidy for about 20 hours after mum has been here and cleaned it
'Daddy and Mummy Time' is around 7pm-8pm. If the older kids get into bed on time
I play or feed my horses with a monitor attached to me

But you know what? That's ok. Because all of that (and many more that I can't think of right now) goes away as soon as I get big smiles from my babies.

We've settled into a new routine.
Wake around 5am, have a feed.
Back to sleep around 6/7am 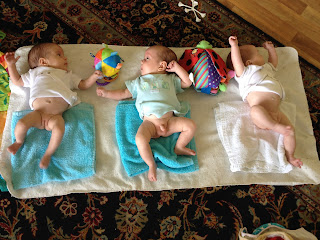 Sleep until 9/10am (sometimes longer!)
Feed and play and back to sleep around 12/1pm
Wake up around 3/4pm, feed and play then back to sleep about 5pm - Ailah doesn't sleep much from here so she gets an extra feed to help her fatten up!
Then I usually wake them as we bath them 7:30/8pm and they have a big feed and are in bed 9:30/10pm
I go to bed straight away too!
Isaac is the only one not sleeping through at this stage (woohoo!) he wakes around 3am and has a feed then back to sleep.


It is amazingly easy feeding just the one baby in the middle of the night! It's all over within half an hour - most of that time is spent burping him. 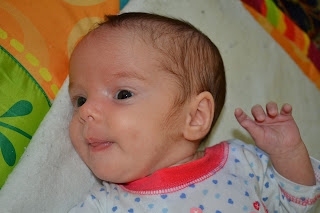 The bubbas are having more awake time lately, which is great if they are happy awake! Isaac likes lying down the least, but that's because of his wind. I feel like he constantly has wind and I'm always burping him. They are really looking at toys now and Ailah finally got hold of a toy yesterday!! At only 10 weeks and 3 days I thought that was amazing, but she has been trying since she was 5 weeks old. You can see it in the pic above. Just this morning after burping her she reached out her tiny hand and touched my face a few times. Bought tears to my eyes. 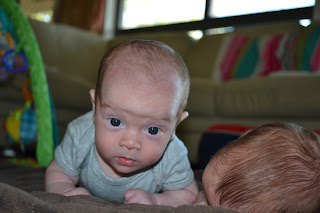 Isaac is such a cutie, he amazed me yesterday with tummy time, lifting his head up ridiculously high for a 10 week old baby! He held it for a while too. He has a little lazy eye sometimes which the Paediatrician isn't worried about, and it is super cute! He is still a big screamer, but I'm starting to be able to talk him round and then he looks at me cooing and smiling. 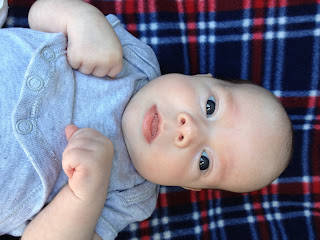 Dylan is just his own little man. He is quiet and easy, but that means he is sometimes 'forgotten'. But when he needs a mummy cuddle he really lets me know. He doesn't scream like the other two, just gives off these heart wrenching sobs! Those who know me know that I'm a bit of a hard ass when it comes to a baby crying, but Dylan breaks through that barrier when he cries like that - it breaks my heart! He has just started giving me gorgeous smiles - or half smiles like I got this morning. But he is the one who coos the  most. Just beautiful.


At 10 and a half weeks, I'm still exclusively breast feeding. I'm going to do a post all about that one of these days. 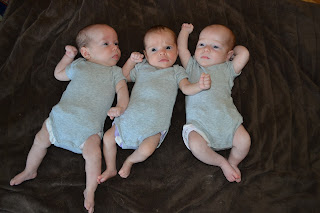 I got my amazing new born shots in the mail this week, done by the wonderful Anya Maria Photography. You can find her website here
She has just had her 4th baby too! She was 32 weeks pregnant when she did my shoot, and it didn't even slow her down, she was still climbing on chairs and bending over in the warmth and it didn't seem to phase her! I'm in love with her images, we can't wait to do family shots with her. Here are some of the images she did:

Can you guess who's who?


This is my favourite shot. Exactly how they were in the womb. Isaac head down on my right, Dylan breech on my left and Ailah head down in between them. I love this shot so much, so does Daniel, he's going to get it tattooed.

Also, a MASSIVE shout out to two Triplet mummas. The wonderful Jess from NSW had her 3 girls vaginally in and went home 5 days later! And the gorgeous Linda who's bubbas transferred back to Nambour from Brisbane last week....home is on the horizon!

And lastly, I have uploaded my birth video to YouTube. Yes, the whole thing. Why you ask? So I can encourage others to birth their babies vaginally. It doesn't matter if they are singletons or multiples. If one woman sees it and it inspires her to birth vaginally, then it was worth sharing.
There are 2 videos, with different music (copyright issues) so depending on which country you are in will mean which video you can watch. You can view them on YouTube here.


And this is how we sleep when we are out and about at friends places. 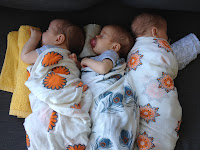 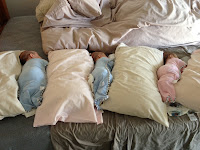