We have certainly made the media! Even if it is mainly local stuff, it was fun! But we have also popped up on a few European and US news websites. 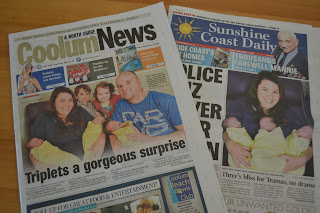 Then yesterday we got a surprise as our free local paper, The Coolum News, ran a story on us too! They are linked with the Sunshine Coast Daily, so they got the info from them. I went to school with the editors daughter so he has always put my beautiful children's birth announcements in for me.....and not just standard announcements! Usually the photo takes up at least a quarter of the page! Thank you Mike! The story is here.

Friday afternoon we were supposed to have WIN News (Our local Channel 9) and Channel 7 (Queensland Channel) come for a TV interview. WIN turned up first, they were lovely, and even the young journalist got a cuddle! We waited and waited for 7, but they never arrived. We found out later that they go wind that WIN had been there and they had thought they had the 'exclusive' so they didn't bother turning up! I'll embed the video below but it may be quicker going directly to YouTube here.

I know many pregnant women around Australia through my October Due Mummies group online, and when they go tho their antenatal appointments, the midwives are talking about me.

Another triplet mum who went to hospital in NSW with threatened labour was told all about me and how the midwives wish more people were like that and had these opportunities.

Friends of other triplet mums sent my links to Emily's Photographs, news paper articles and TV interviews saying 'have you seen this!?'

We filled the first 13 pages of Google.

I'm just a bit chuffed. And proud. But the most important thing for me is getting the message out there. Multiples can be birthed naturally. Now, I'm not saying that all HOMs should go down this track. It was tough at times, and that was with a supportive OB. There is 100% place for Cesarean Sections in multiple births. I just don't think women should be told they have to have one at their first appointment. Birthing naturally is an option, in some cases. I am so glad I fitted the bill!