Wow, it's been almost 18 months and here I am again! I do apologise, but with 6 kids now and running a small business life is BUSY! Thank you all for your messages and comments wondering if everything was ok - it sure is!

I'll go back to the last time I posted. I can't believe how little they were and they were only going into big beds then. Now the trio are all split up into rooms with others and Isaac shares with our #6. Here's the birth story:

Our gorgeous last bubba arrived at home on Saturday 27th of September just after 5am. I was just over 40 weeks at that stage and VERY much over it. That last pregnancy really took it out of me and I was truly exhausted by the end. I had prodromal labour on and off for about 3 weeks, I even had contractions for over 7 hours one night....then they disappeared. Very frustrating. But that morning I woke up just after 3am with a contraction and thought 'wow, that was big, it even woke me up'. I started to fall back asleep again and then bam, a huge one that made me moan out in pain. Then a pop and away went my waters! I hopped up and turned the light on to see very red waters, which I didn't like. I rang my homebirth midwife and we decided it was ok, I wasn't continually bleeding, it had just been in my waters. She began to make her way over. Dan immediately started filling up the pool while I gathered the last few things I needed during light contractions.

Now our kids never - never wake up. But that morning Ailah did. It was like she knew something was up, so Dan got her up and brought her into our room and she proceeded to chat and chill out with us for the rest of the birth. My midwife arrived just after 4am, closely followed by my back up midwife. At that stage I was comfortably breathing through contractions, but I did have to stop what I was doing to work through them. All else was fine, but not long after the team arrived it all started to ramp up.

This is the first time I've written this down, and you all know that I'm a very positive person and my beliefs on birth. Well, this was the most hardest thing I have ever done. And if I could have chosen, I would have given birth to the triplets all over again instead of that birth.

The contractions increased dramatically and for the next 45 mins or so they were smack bang on top of each other with a ferocity that I have never felt before. My entire body shook with each wave, I was standing up holding onto my dresser as tight as I could and shaking ridiculously. I only had about 30-45 seconds between each wave, then I'd be hit again. I went through transition, I got very, very icy cold and wanted to vomit but never did.  Not long after I started to push. That's when the team suggested that I get in the pool.

The birthing pool had been set up in my room for a few weeks. We just kept it covered and waited. I'd dreamt about birthing my last baby in that pool, I relished in the thought! Dan had been frantically trying to fill it (it was HUGE and high) and had been boiling water as our hot water system was empty! The amazing feeling sinking into the half filled pool was just that - amazing! But then the next few contractions made me want to push, I knew this was go time and soon I'd be meeting this little person! I was on my knees and had just finished a big pushing contraction to look up to see Dan videoing me and Ailah next to him 'videoing' me on my phone! It made me laugh and relax a little! The comment was made 'look out, she's smiling, we're about to have a baby!' We all had a laugh knowing that she was right!

The next 2-3 contractions were huge, I could feel the bub descending but it was harder than ever before. It truly felt like bub wasn't moving through the birth canal like all my other births. I reached down and could feel bubs head beginning to emerge and it was suggested that I open my knees more to give bub more room. With a lot more pushing and some yelling, a head emerged and I thought to myself 'oh thank God, that's the hard part over'. How very wrong I was! I had 2 more contractions and nothing, not a thing happened. I looked into my midwifes eyes and she said 'ok, lets get you up, I want one leg up on the side of the pool'. It took the 2 of them to get me up, one having to lift my leg.

We had discussed shoulder dystocia and what would need to happen if we felt that was occurring. I knew the drill, I knew I had to get my pelvis as open as possible and get that baby out. One midwife was supporting me, the other my leg and watching bub. I pushed and pushed and pushed until I roared like a lion. Seriously. I have never made so much primal noise in a birth. It scared me. After 2 of those pushes my midwife made a slight adjustment with bubs and the shoulder was released and bub came through the birth canal like a freight train. It all happened so fast that bub went for a little head wetting into the birth pool! Bub was grabbed and passed through my legs before going under and I cuddled this BIG baby to my breast. 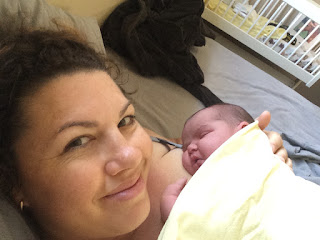 I looked up to see 2 happy and relieved midwives, a fairly scared Dan and a totally happy Ailah who wasn't worried one bit. I had done it! It was a mammoth effort, one I'm happy to never go through again. Bub was a little stunned and took a few moments to breath and pink up, but fine thankfully. 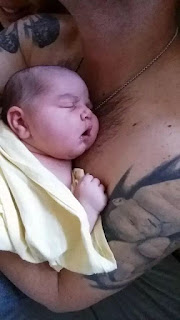 Before long we were snuggled into bed together having a feed and skin to skin. All along Amali had said she wanted to be at the birth and then reveal the sex to us. Everything had happened so quickly that we didn't get a chance to wake her. In a sense I'm glad she didn't see that birth as I think it would have scared her! It was still early and we decided not to wake the kids yet and just reveal the sex without them - we couldn't wait! I lifted that little leg to reveal.......

We were ecstatic! A 3:3 ratio of boys and girls. It was a beautiful moment. While I was still pregnant we had been discussing names and knew this bub would be Lucas if it was a boy. Girls names were a little harder but one day I was sitting down having a cuppa and the name 'Jaida' literally popped into my head. I loved it straight away and went to spell it to see how I liked it written. Jada, Jaida and Jayda, however I was drawn to the 'i' spelling for some reason. When I realised why I was, it was just one of those amazing life moments! Check it out:

J ordan
A mali
I saac
D ylan
A ilah

Yep - the kids first letter. In birth order. I had rung Dan and he was blown away too and we both loved it (no easy feat!)

So our lucky last bub, a girl, was named Jaida Faye. Faye is my mothers middle name. 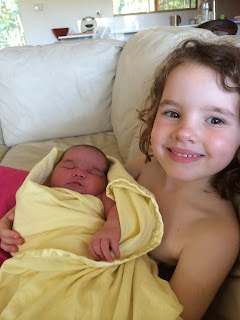 The kids began to wake up and come in to our room to such a big surprise! The trio were a little taken aback I think! Amali was truly in her element. While I had a shower it was her that got skin to skin with Jaida, such a beautiful moment. What surprised us the most was Isaac's reaction. He's the roughest, loudest, tantruming kid, but faced with this little angel, he melted. He's been that way since. They have an amazing bond, she can even say 'Isey' which is his nickname.

However, that wasn't the end of the surprises that morning. The other surprise happened when the girls weighed her. After unwrapping her I did think, 'wow, she's a big bub', but when the girls went quiet, then started exclaiming it made me wonder. I'm still shocked that I gave birth vaginally, with no pain relief, and no tearing, to an 11 POUND baby!!!! That's 5kg. I know right??!! 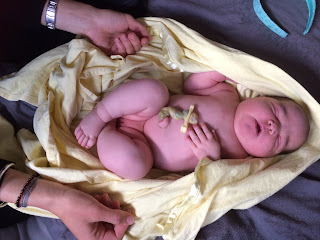 It took me months to come to terms with Jaida's birth because I had never given birth like that before. It was a tough pregnancy and tough, fast labour. 2 hours. A little too quick for my liking. 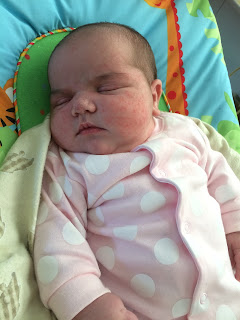 Miss Jaida has slotted into this crazy, large family like she's always been here. She's a dream, she truly is. My family is complete and my heart is complete. I don't have those cravings for another baby like I did after the triplets. I don't see or smell or hold someone else's newborn and get clucky. I'm full (as is my washing line!) and the feeling is beautiful. 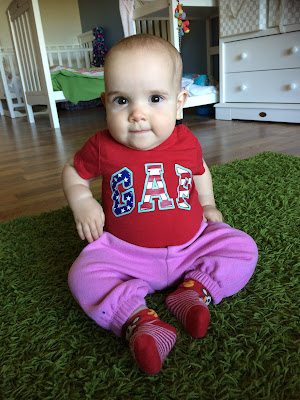 We are a week away from the trio's 3rd birthday. Where that time has gone I do not know. My first born, Jordan, is 8. He's an amazing kids with the occasional attack of attitude, but just as much as Amali, 6. Jaida is 11 months and will be walking soon.

I'm going to leave my blog there. It's taken me almost 18 months to write another post, so this will be my last. Thank you for sharing this craziness with me, from 2 children, to 5, to 6. 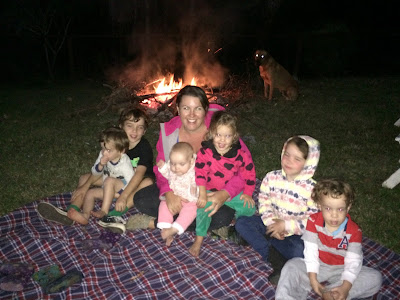 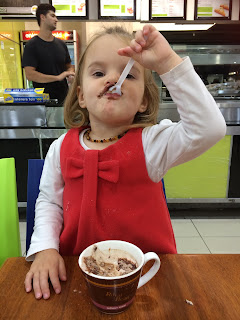 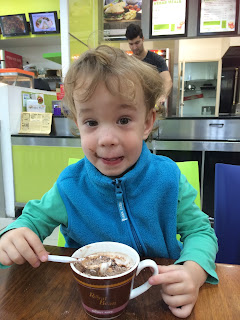 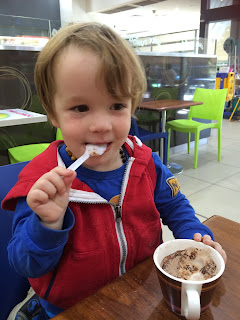 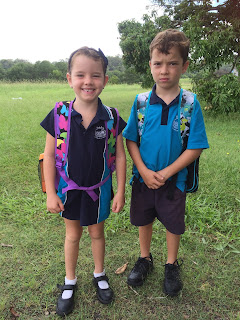